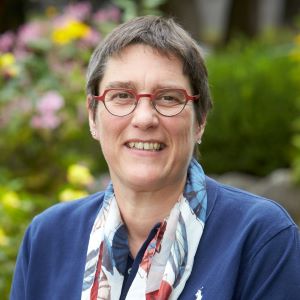 Marleen joined HVWS in 1996 as the co-teacher of the Class of 2002 and took on her own class in 1997. She has graduated classes in 2005, 2013, 2017 and 2019. While at HVWS Marleen has also worked as the Pedagogical Resource Teacher—mentoring other teachers—and taught math for several years to the Classes of 2015 and 2018. Marleen discovered Waldorf education when her goddaughter (now 34) was enrolled in the Vancouver Waldorf School’s Early Childhood program. This prompted her to check out the local Waldorf school in Brugge.

When she came to HVWS it was because the school was not far from Spring Valley, NY where her then-fiancé (Nigel Harrison, our longtime Eurythmy teacher and Therapeutic Eurythmist) was enrolled to study eurythmy. They thought it would be a 4-year American adventure and now it is a quarter century later! Some of Marleen’s favorite non-school pastimes are reading, going to the movies, and traveling the world. Were she not a teacher she would be a librarian.