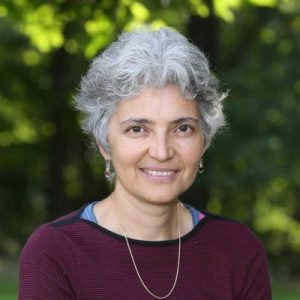 Marcela was born in Bogota, Colombia and is fluent in Spanish and French. She studied Architecture at the University of Los Andes, Bogota where she graduated in 1988. In 1991 she received a Fulbright Scholarship to do a Master of Science, History and Theory Program at the University of Cincinnati, OH. Marcela also studied animation at the School of Visual Arts, NYC.

Before becoming a teacher, Marcela worked in architecture research projects at the University of Los Andes, Bogota and as an architect in the design and construction of houses in Colombia. In the late ’90’s and early 2000’s she received a grant from Colombia’s government to research, film, and produce a stop animation 16 mmm film “Las Semillas de la Tagua,” about Kalashe-Kalabia, the chief of the woods, a myth from the Wiwa and Kogi communities from the Sierra Nevada of Santa Marta, Colombia.

Prior to teaching at HVWS Marcela worked as an assistant teacher at a local kindergarten for underprivileged children in Bogota, as a freelance tutor for children in grades K through 8 in NYC, as an art program teacher for children ages 2 to 8 years old in Brookfield, CT, and running a daycare, also in Brookfield. Marcela discovered Waldorf education when looking for a school for her daughter, and began as a part-time Spanish Teacher at HVWS in 2007.

Marcela completed a year of Waldorf Foundation Studies while teaching at HVWS as well as a year of HEART (Waldorf Extra Lesson) training. In her spare time, she researches different topics related to contemporary questions and creates art projects.