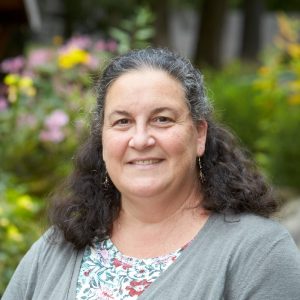 Leslie spent four years on a kibbutz in Israel, where she worked in the children’s house. After studying nursing for two years at the Ichilov Medical Center in Tel Aviv, she completed her studies in elementary education at the Kibbutzim College of Education. When Leslie was pregnant with her daughter Samantha, she discovered Waldorf education through a friend who taught in a Waldorf kindergarten. Leslie knew this was the place that she would send her daughter, and later completed her own Waldorf training in 1999 at the David Yellin College of Education. Leslie was hired as the English teacher at the Adam Waldorf School in Jerusalem, where she also taught Handwork and was responsible for creating the weekly schedule and finding substitute teachers.

In 2002, she moved to Connecticut with her family. She worked as an assistant at My-Las Treehouse, a Waldorf-inspired daycare in Redding, for a year before joining HVWS as a Class Teacher in 2003. All three of Leslie’s children are HVWS graduates. Leslie enjoys spending time with her family, reading, and gardening. She loves to travel.